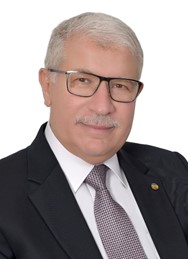 Sayed Farouk was the Senior Vice-Chairman of the Arab Contractors Company from September 2013 till September 2020.

Prior to assuming his current position he was the Board Member from April 2013 till August 2013 supervising AC branches in: Kuwait – Saudi Arabia – UAE – Oman – Yemen – Qatar – Iraq.

He was the Board Member supervising Housing, Quarries, Ready Mix Concrete, and Electromechanical Works Sectors (from May 2012 till March 2013).

From December 2006 till March 2013, he was the Head of Sector supervising: Distinguished Buildings, Industrial Buildings; Oman and UAE Branches.

Since his graduation he joined the AC in Bridges and Structures Department.

He handled many leading positions in mega projects such as: Central Bank of Egypt – Principal Bank for Development and Agricultural Credit – Bibliotheca Alexandrina.