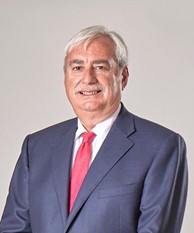 Mr. Jean-Christophe Durand joined the National Bank of Bahrain (NBB) as the CEO in December 2016 with a focus on reinforcing and expanding the Bank’s role as a driver for economic growth and development.

Mr. Durand brings over 39 years of international and regional banking and finance experience gained from senior leadership roles at leading global banking institutions, 32 years of which were in the GCC. Mr. Durand graduated from ESSEC Business School (Ecole Superieure des Sciences Economiques et Commerciales) in Paris. Prior to taking on the role of CEO of NBB, he was the regional CEO of BNP Paribas for Middle East and Africa, and was responsible for Corporate and Institutional Banking and Asset Management, and served on the board of a retail bank owned by the BNP Paribas group.

He holds several Board positions locally and regionally, including sitting on the boards of Gulf Air, Bahrain Telecommunications Company (Batelco) and Bahrain Islamic Bank. He serves as the Chairman of Batelco’s Audit Committee, Chairman of BisB’s Executive Committee and is a member of the Human Resources Committee at Gulf Air. Additionally, he is the Chairman for Umniah Telecommunication Company in Jordan, Director of the Bahrain Institute of Banking and Finance (BIBF) and Chairman of the French Chamber of Commerce and Industry in Bahrain (FCCIB). Mr. Durand was awarded the ‘Legion d’ Honneur’ by the Government of France.